Your hardware wallet will be the most important device for securing and protecting your Litecoins and other digital currencies. Compared to the hot wallets (mobile, desktop or website) these wallets are not connected to the internet. Only when you decide to receive or transfer Litecoins the device has to be connected to the internet. The high level security is based on the use of the external device using a microcontroller or smart card. Ledger Wallet uses a smart card.

The French company Ledger Wallet is active since 2015 and started with solutions for safely storing Bitcoins. Ledger Wallet is the result of a merger between three startups: La Maison du Bitcoin, a bitcoin centre in Paris; BTChip, a hardware wallet manufacturer; and Chronocoin, an exchange platform. BTChip launched in 2012 the HW1 wallet. After the merger Ledger Nano was lauched in 2014. With the Nano S storing of Litecoins became possible with this multi-currency wallet. The wallet supports among others Litecoins, Bitcoins, Ethers, Ripples. Ledger Blue is the flagship product and is a personal security device.

The Ledger Nano S comes in a package which includes the device itself, USB cable, some accessoires, instructions and a recovery sheet. Initializing your Nano S for its first use, or after it has been reset, you must create a new wallet and configure the Nano S. The recovery sheet is the backup for your wallet by using 24 words. These words are the what gives you back ownership of your Litecoins in case of loosing the device or forgetting your PIN code. A step by step configuration. 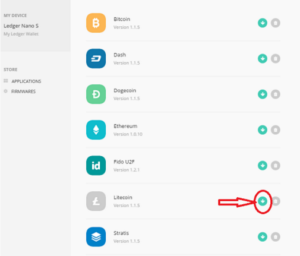 After the step by step configuration your wallet you have install the Ledger Wallet Bitcoin in order to prepare the wallet for storing Litecoins. Storing Litecoins is done via the Bitcoin wallet. Next you have tot install Ledger Manager in order to prepare the wallet for storing altcoins, including Litecoin. After the installation you have to launch Ledger Manager and connecting your Nano S via USB to your computer an interface is shown. Click on the green bottom arrow icon and confirm on your device the installation of the Litecoin wallet. Quit Ledger Manager.

Why use Ledger Nano S?