You are here: Home / FAQ / What is the price expectation of Litecoin?

Litecoin has gained momentum at the ending of 2017. After Bitcoin’s enormous rally, Litecoin is making a steep trajectory. We will see where it will end. Hanz Holdinworh is estimating an ratio of LTC/BTC of 0.25 which is about 3,750 USD. (10th of December 2017) Starting the strong rise of Litecoin, the ratio was around 0.01. 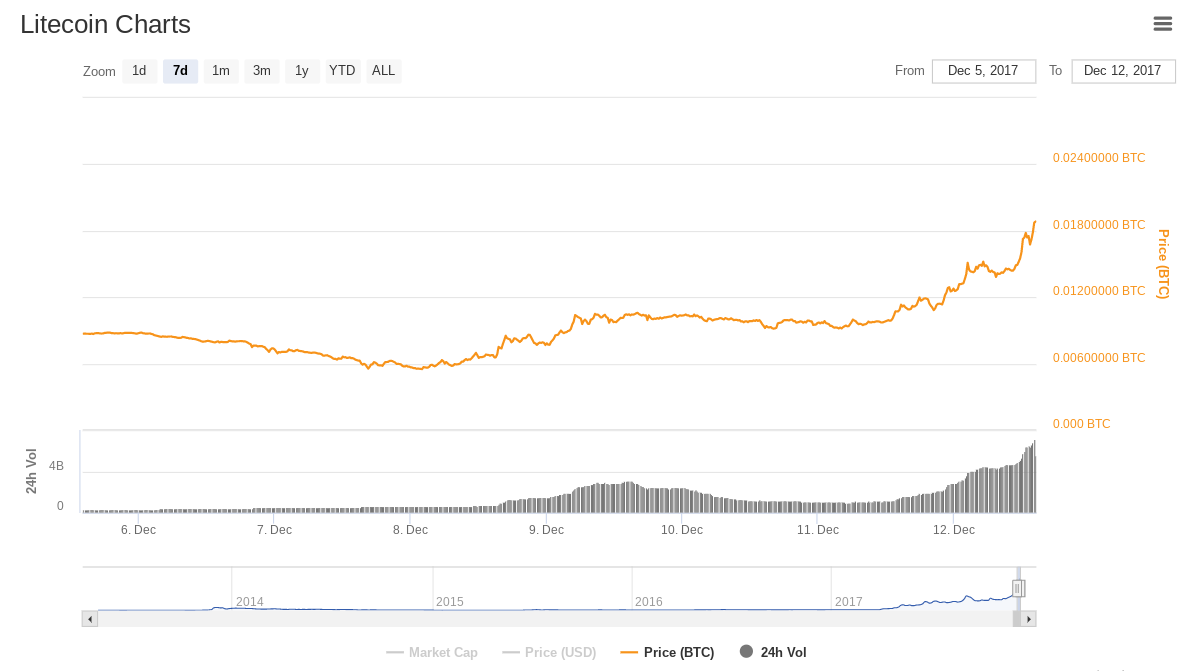 Starting point of Hanz Holdinworth is questioning the silver to gold ratio is frequently done between Litecoin and Bitcoin.

Indeed Charlie Lee created Litecoin in order to make up the shortcomings of Bitcoin. Charlie noticed the capabilities of Bitcoin as a store of value, not as a payment medium for regular day to day usage. Instead of competing with Bitcoin, Charlie made Litecoin a companion. Litecoin as the silver to Bitcoin. In making this analogy the physical commodities are different then the digital assets, but are mostly used in the valuation of Litecoin by newcomers.

Instead of making the analogy, the fundamentals in the digital world of assets are different. Understanding of supply, demand and real world utility of Litecoin will lead to different insights.

Both Bitcoin and Litecoin share the use of a supply limit and both did not allocate a huge amount of coins in the early existence. They both follow a controlled supply curve by mining the assets. No premine has taken place. Litecoin has a historical trackrecord of improvements and has a strong community. Into the details of the analysis by Hanz Holdinworh.

Comparing the coins, 4 times as many Litecoin will be created with currently 3.2 as many Litecoin in circulation. In the extreme and a things equal, Bitcoin’s price should be worth 3.2 to 4 times as much as 1 Litecoin. Which puts Litecoin’s pirce in the range of 0.25 to 0,31 Bitcoin. Of course a bit simple, but this shows the upside. A better insight can be gained by using the utility value and real world usage of both.

Pricing based on transaction value

Per transaction, the value on average which is transferred via Bitcoin is $105,625. For Litecoin this figure is $36,201.

Over the 6 month period, Bitcoin transferred $40.6 billion and Litecoin $2.6 billion. A factor of almost 16. Relating this figure to the actual value of exchange.

Source: Hanz Holdinworth, Litecoin’s rise to $1000 will be just the beginning of cryptocurrency’s silver surfer